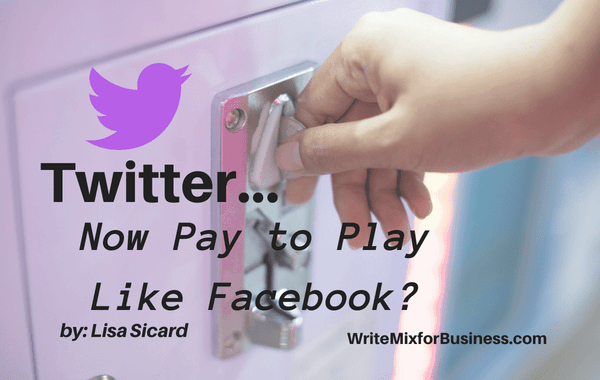 Is Twitter A Pay to Play Social Network Now?

A month ago, I noticed a lot of changes on Twitter. It was right after they slashed over 6 percent of all users. It was tens of millions of accounts that Twitter eliminated. Many popular Twitter accounts lost millions of followers. Personally, I lost about 300 followers. But, if they were bots or fake accounts, it was the best thing for Twitter to do.

But, that’s not the biggest change. It was the algorithm and the ability to change your Twitter feed – just like the Facebook feed options that really surprised me.  I started to notice less engagement on the Twitter network. At that time, I was still at my day job and not on Twitter as often as I wanted. Was it because with Twitter – A Pay to Play Social Network had evolved?

What happened with the Twitter algorithm? Is it because Twitter – a pay to play social network has evolved?

Twitter now shows you rank tweets, in case you missed it tweets, then, the old chronological tweets.

What are rank tweets? These are the best ones, relevant to you, according to Twitter. These tweets had the most engagement from folks you follow. In case you missed it, these are from folks you most engage with based on a relevance score.

Then, there is the old chronological Twitter algorithm that still exists. You may see some “promoted” tweets here too.

There is a lot more noise now in the Twitter stream, just like there is on Facebook. But you can adjust filters in your settings and privacy tab to help quiet that noise. I have adjusted my Twitter timeline to show the best tweets first – tweets I’m more likely to care about most will show up first in my timeline.

Promoted Tweets…Key to Twitter A Pay to Play Social Network

Twitter has always offered advertising on their network. I remember back in the early days when it was very expensive. If I remember correctly, you had to spend like $20,000 to advertise there. Now, you can spend as little as $5 to promote a tweet or to gain followers. Is this what started the has Twitter become a pay to play social network question? 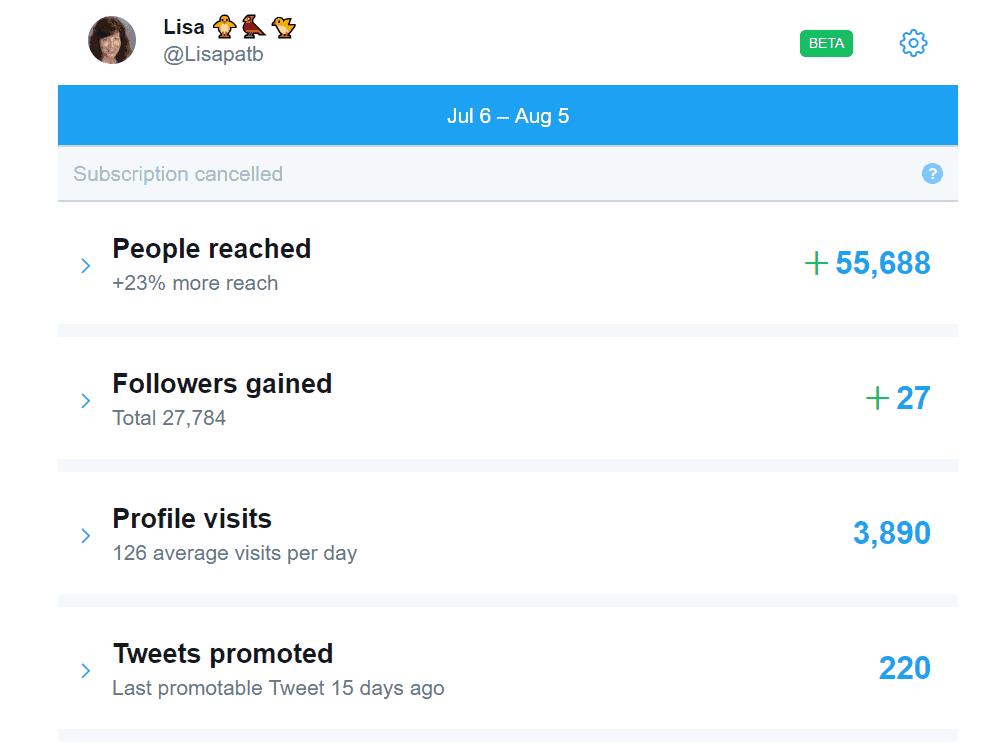 I first tested the Twitter Promote Mode out in July. It was okay, but I was not overly impressed with the results. There was a gain of 27 followers which is less than 1 per day! But, the profile visits were quite high over 3,000. Maybe July was not the best month for a test.

I think this Twitter ad program, about a year or so old, is what Twitter did to make more money and, therefore, make it more of a pay to play social network.

Now, for this month, I’m doing a few $10 regular Twitter ads for followers. Today you can choose targets and audiences, something you couldn’t do a few years back.  I’ll be doing a few other formats as well, like promoting a special tweet or one for just local folks.  Stay tuned for Twitter ad results to come! Is Twitter a pay to play social network…or not?

There was a gain of 27 followers which is less than 1 per day! But, the profile visits were quite high over 3,000. Maybe July was not the best month for a test. #TwitterpromotemodeClick To Tweet

What Can You Do NOW to Increase Your Engagement on Twitter?

Recently, I left my day job and became a little more active on Twitter. I try to join a few Twitter chats weekly. I fill up the Buffer app which has been an awesome tool with newer updates. Then, I engage with others a few times a day for about 5-10 minutes each time.

What is my point? You must be a little more active on Twitter today to see your engagement level stay the same as it was a few years ago. But it is worth it! The Buffer app, using one of their premium plans, shows you how many clicks on a post or page to your website you get from a tweet. I’m amazed to see just how many but, then again, Google Analytics tells me the same story but, without as specific details.

Twitter is still one of my top sources of traffic to the website, as it has been since I began blogging at Inspire to Thrive.

You must be a little more active on Twitter today to see your engagement level stay the same as it was a few years ago. #TwittertipClick To Tweet

There are so many ways in which you can use Twitter with images. People LOVE images on Twitter. Be sure to include them.

*Gifs – You can have a lot of fun with these especially in responding to people’s tweets. I love using these each day!

*Videos – Up to 2 minutes and 20 seconds. Otherwise, you can edit it right on Twitter to meet their spec for the length of time.

*Emoji’s – Who doesn’t love 💗 them? Now you can use them via the Buffer app if you schedule your tweets through the Buffer. I LOVE that feature!

*Images – 1024 x 512 pixels is the best size image to use for Twitter. Did you know you can use up to 4 images on a tweet? They don’t always look great so do make sure to experiment, first! And, don’t forget to always check what they look like on mobile vs desktop too.

*Personal photos and videos – People love to know who other people are. What better way than through photos and video of you or your business behind the scenes. You may also add stickers to your photos easily on Twitter.

*Bullet points – If you are giving a lesson in your niche, bullet points within tweets work well! I see Rebekah Radice do this often!

*Polls – Be sure to give the poll a few days so you can retweet them! People love participating in polls. Have some fun with these, too. I love doing them for future posts. Some people add their own answers as well, giving you more to write about.

*Thank You Tweets – Thank others for following you, likes and, for sharing your tweets or RT’s. (I’m guilty of not always thanking new followers as I sometimes get behind!) Of course, if you put new followers into lists along the way, that saves you time too.

Twitter chats happen every day and at various times. You can find some that are relevant to your business by visiting Tweet Reports. My all-time favorite Twitter chat is #BlogChat, on Sunday nights at 9 pm EST. I haven’t been on for a while but, did join in for many years.  There are so many to choose from, so do check them out.

When you join Twitter chats you meet many new people on Twitter. I still talk to some from #BlogChat I met years ago. You learn new things about people and their businesses. Then, you can check out their blogs, websites, etc.

Some Twitter chats have moderators to help. These moderators keep the chat going and organized. I’ve been on some of these chats where the first question doesn’t come until 30 minutes after it starts. Many folks think it’s a party time and not a learning opportunity, etc.

Stay tuned as I may start a new one in the coming months! 😊 Maybe to offset the Twitter – A Pay to Play Social Network Like Facebook? direction.

TweetChat is a tool you can use to easily follow along in a Twitter Chat. They now offer one-click user highlighting and blocking along with new stream buffering help to limit super active hashtags to 5 tweets at a time, giving you more control over how you experience the conversation.

TweetChat now even has a premium service to give you branded space. You can put your Twitter chat into a branded page and publish on your blog or website. What cool features they offer! 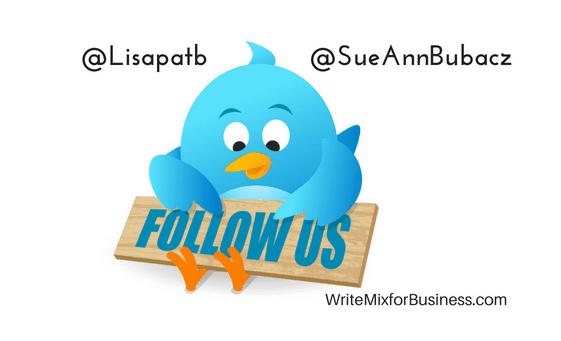 Stay active! I tell people to spend at least 5 minutes in the a.m. and 5 minutes late in the day to be active on Twitter. Keep your Twitter notifications on your mobile device in case someone tweets you throughout the day, so you can engage. Be sure not to have everything beep from it. Just those who are engaging with you.

Remember, social media is about engaging with other people.

Think about it – How much time do you spend on Facebook? Try to put just some of that time into Twitter every other day and you will notice a difference. Too many people sign up for Twitter, don’t see many followers or understand how to engage. Then they quit and leave their Twitter handle in the dust.

It takes time to build up a Twitter account so, don’t worry. You need to follow more people, add some people to your Twitter lists, and update your profile from time to time.  Increase your number of tweets as time goes on. The more followers you have the more tweets you can tweet out.

How much time do you spend on Facebook? Try to put just some of that time into Twitter every other day and you will notice a difference. #socialmediaClick To Tweet

I’d love to know in the comments below if you are still active on Twitter and why or why not? And if so, how do you engage with others on Twitter? Do you wonder… is Twitter a Pay to Play Social Network Like Facebook now?

Please follow me on Twitter at @Lisapatb and @SueAnnBubacz so we can engage with you. Happy Tweeting 😊

Founder of Inspire to Thrive. Ranked #2 Twitter Influencer by Report Garden. One of the Best Top Marketing Blogs in 2015 and 2016 by Fit Small Business. Love Social Media, SEO, Blogging, Marketing, Weather and more!

With over 30+ years in marketing and on her eighth year blogging away at Inspire To Thrive. Lisa loves helping others with social media, blogging and content marketing. She provides these services to businesses and well as consultations and social media training.